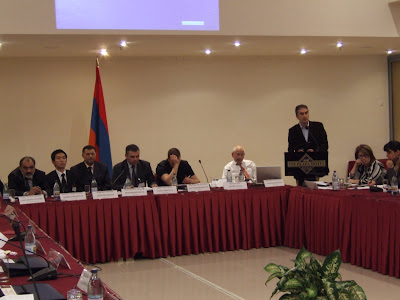 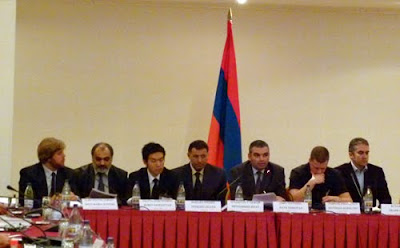 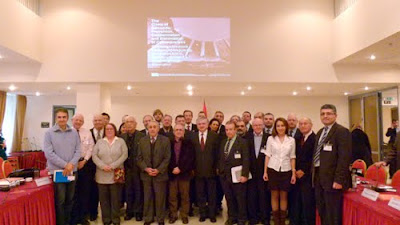 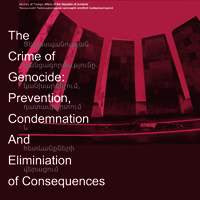 Ministry of Foreign Affairs of the Republic of Armenia in cooperation with the Armenian Museum- Institute of Genocide
International Conference on Genocide Prevention, Condemnation and Elimination in Yerevan, Armenia.

Genocide scholars from about 20 countries are in Armenia for a two-day international conference on Genocide that kicked-off on Tuesday in Yerevan. The conference , organized by the Ministry of Foreign Affairs of the Republic of Armenia in cooperation with the Armenian Museum- Institute of Genocide, is titled, “The Crime of Genocide: Prevention, Condemnation and Elimination of Consequences.”
Opening the conference, President of Republic of Armenia Serzh Sarkisian called for broader international recognition of the Armenian genocide, stressing that the crime’s affirmation is essential for preventing more crimes against humanity.
Sarkisian’s remarks come amid growing pressure on the US Congress to bring the Armenian Genocide resolution (H.Res.252) to a vote in the full House of Representatives. The conference is part of what seems to be a strong push by official Yerevan to support the measure in the aftermath of its collapsed talks with Turkey to normalize relations.
One of the conference participants, prominent Armenian-American historian Richard Hovannisian, suggested that Armenia’s government has toughened its position on genocide recognition since the collapse of its normalization agreements with Turkey. “It seems to have become more determined,” Hovannisian told RFE/RL’s Armenian service.

Sarkisian’s policy of rapprochement with Turkey has triggered a barrage of criticism from many in Armenia and its worldwide Diaspora. They say that Ankara has exploited it to keep more countries from recognizing the slaughter of some 1.5 million Ottoman Armenians as genocide.
Taner Akcam, a U.S.-based Turkish scholar, said such recognition would make it much harder for the Turkish state to claim that Armenians died in much smaller numbers and not as a result of a premeditated government policy.
“I strongly recommend recognition of the Armenian genocide,” Akcam told journalists. “This is also important for the prevention [of more genocides,]” he said.
He went on to describe Turkey’s treatment of the issue as “a policy of 95 years of denial” that is preventing Turkey from developing a true democracy. “Facing history is a very honorable thing and I’m hopeful the Turkish government will change the policy soon,” Akcam added.
“I do hope that Turkey will face this dark chapter of the history. Turkey is not the Turkey that we know for 10 years. If it wants to be a member of the European Union, of the civilized world, it has to acknowledge these wrongdoings of the past,” Akcam said.
But Turkey’s policy of denial and its relations with the leading countries of Europe have diluted pressure from the EU for Turkey to come to grips with its past, according to Tessa Hofmann of the Free University in Berlin.
Hofman explained that in her own country, Germany, the government, now more than ever “stays committed to its position of categorically denying that what happened was genocide.”

Armenia should therefore submit its case to the International Court of Justice in The Hague, she stressed.
The conference also explored Israel’s role in Turkey’s denial of the Genocide, with a presentation by renowned genocide historian Israel Charny, who said Jerusalem should officially recognize the crime on a political level.
“Though, Israel has long recognized the Armenian Genocide on societal and cultural level, at the state level, this has not happen,” said Charny.
Speaking about retribution and reparations, Egyptian scholar Ahman Abgel Avi Salami said the descendants of Armenian Genocide survivors have the right to demand compensation from Turkey as a successor of the Ottoman Empire.
According to Abgel Avi Salami, Turkey should recognize the Armenian Genocide, apologize, and pay compensation. “It has to promise not to commit such crimes in the future,” he said, citing the German example, where Berlin recognized the Holocaust and paid compensation to Jewish descendants. “Turkey should do the same regarding Armenians,” he added.
The scholar explained that the Republic of Armenia has the right to file a lawsuit against Turkey to protect the interests of Armenians and descendants of the Genocide survivors, who once found shelter in the territory of Armenia.


“U.S., France and Canada also can protect interests of the descendants residing in their territory. Legal responsibility for genocide has no time limits, while moral responsibility surpasses the legal one,” said Abgel Avi Salami. “This is mentioned in the UN resolution [on Genocide Prevention]. However, real politics prevents from implementation of this resolution.”
Sarkisian had similarly criticized the “political expediency and short-sighted opportunism” that often shape governments’ attitudes towards past and present genocides.

“The bitter lessons of the Armenian genocide did not go down in the history and memory of humankind as mere memories of the past. They came to be replaced by the horrors of the Holocaust and the tragedies in Rwanda, Darfur and many other places,” he said in a speech at the forum. His remarks were a clear reference to the reluctance of countries to recognize the Genocide and risk antagonizing Turkey.
Theofanis Malkidis (Greece), in his paper “ The Crime of Genocide and the Case of Greek Genocide” said that the word genocide (form Greek and Latin words Genos and cide) was coined by Raphael Lemkin. In his writings on genocide, Lemkin is known to have detailed the fate of Greeks and Armenians in Ottoman Empire and Turkey. In August 1946 the New York Times reported: “Genocide is no new phenomenon, nor has it been utterly ignored in the past. ... The massacres of Greeks and Armenians by the Turks prompted diplomatic action without punishment”
The Greek Genocide is a mass crime against humanity and civilization. 1.000.000 of Greeks, from 2.500.000, were exterminated.
This premeditated destruction of the 40% of the Greeks, constitutes genocide according to the criteria of U.N. (article 2 of the Treaty for the Prevention and Punishment of Genocide, paragraphs a, b, c, d and e). Each nation has the right to intensely demand from the authorities of the crimes and offences committed against it to recognize them. Recognition which constitutes the confirmation of a nation’s right to the respect of its existence according to the international law and the historic truth, T. Malkidis, said, and called Armenian parliament to recognise the Greek Genocide.

Peter Balakian, professor, author of the novel “Tigris burning. The Armenian Genocide” , said for the Problem of Responsibility and the Destruction of Cultural Property, especially on Armenian Genocide.


Armenian Foreign Minister Edward Nalbandian, in the closing remarks of the conference, made the same point, saying that the prevention and condemnation of genocides should not be taken hostage to politics and instead must be on the international community’s agenda. “Genocide denial and impunity pave the way for new crimes against humanity. Regardless of geopolitical or other interests, the international community must be united in condemning and preventing genocide,” Nalbandian told conference participants.

The conference consisting of four sessions was moderated by the Deputy Minister of Foreign Affairs of RA Arman Kirakossyan, by the adviser to the director of the Institute of Oriental Studies of the National Academy of Science of RA Nikolay Hovhannisyan, by the director of the Armenian Genocide Museum & Institute Hayk Demoyan and by the member of Constitutional Court of Armenia Vladimir Vardanyan.
The international conference on "The Crime of Genocide: Prevention, Condemnation and Elimination of Consequences" dedicated to the adoption of the UN Convention on prevention and condemnation of the crime of genocide.
The participants also visited the Tsisternakaberd memorial complex of Monument and Museum / Institute of victims of the Armenian Genocide and planted a tree in the "Memory Park". Finally the participants met His Holiness Karekin II Surpreme Patriarch and Catholicos of All Armenians.