The Union of Armenian Associations in Sweden, Mihran Demirian

Assyrian International News Agency
The Assyrian Genocide Research Center (Seyfo), based in Sweden, has sent a letter to Serzh A. Sargsyan, the President of the Republic of Armenia, urging Armenia to officially recognize the Assyrian genocide, which occurred simultaneously with the Armenian Genocide. Assyrians, Armenians and Greeks were all victims of genocide between 1914 and 1923, a campaign which aimed, and succeeded, in cleansing the Ottoman Empire of most of it's Christian subjects. Nearly three million Assyrians, Armenains and Greeks were killed during that period.
The letter was signed by 36 organizations and 22 scholars. Here's is the text of the letter.


On behalf of Seyfo Center and its affiliates worldwide, I extend our warmest greetings to you and to the venerable Armenian people. I would also like to take this opportunity to express my sorrow and condolences to Your Excellency in memory of the victims of the Armenian Genocide perpetrated by the former Ottoman Empire between the years 1914 to 1923. This barbaric and calculated genocide was one of the most heinous crimes committed in the annals of human history.
Presently I am the director of Seyfo Center (also known as the Assyrian Genocide Research Center). This organization brings together activists and scholars from both Assyrian and non- Assyrian backgrounds, who share a common passion and determination towards working for the recognition of the genocide committed against the Assyrian people during the same period in which over a million and a half Armenians perished. Seyfo Center's Board of Directors includes several distinguished and internationally renowned genocide scholars and academics.

As a matter of great importance, we would like to bring to your attention the campaign for the recognition of the genocide that was committed from 1914 through to 1918 by the so-called the 'Young Turks' against the Assyrian inhabitants of the former Ottoman Empire. While the world community is today fully aware of the Armenian Genocide, knowledge of the 'simultaneous genocides' committed against other minorities, such as the Assyrians and Greeks is little known. Before the genocide committed against them, the Assyrian people had resided in Anatolia alongside their Armenian and Greek compatriots for more than two millennia.

During the genocide hundreds of thousands of innocent Assyrians were slaughtered at the hands of the Ottoman Turks and their Kurdish allies. Many scholars hold that as much as three-quarters of the Assyrian nation were lost during the genocide. The targeting of the Empire's Armenian, Assyrian and Greek minority subjects in particular, was very much a consequence of the Christian faith professed by all three groups. Indeed the architects and perpetrators of the genocide, the Ottoman Turks and Kurds, made no distinction between the different ethnic origins of the Empire's Christians, arguing that 'an onion is onion, whether white or red, all must be chopped'.
As you are no doubt aware, an extensive corpus of academic research and archival material exists documenting beyond the shadow of a doubt that genocide was perpetrated against the entire Christian population of the former Ottoman Empire during and following the First World War. The then Young Turk government systematically executed a policy of extermination against its own Christian citizens which took the form of massacres, death marches and forced deportations. As a result, these brutal policies resulted in the death, deportation and displacement of millions of Armenians, Assyrians and Greeks.

In addition to archival materials, countless books, studies, doctoral thesis and articles attest to the irrefutable fact that this genocide, one of the first genocides of the 20th century, did indeed take place. In December 2007, the International Association of Genocide Scholars (IAGS), the world's foremost group of genocide scholars formally recognized both the Assyrian and Greek genocides (in addition to its 1997 recognition of the Armenian Genocide), announcing that:
"It is the conviction of the International Association of Genocide Scholars that the Ottoman campaign against Christian minorities of the Empire between 1914 and 1923 constituted genocide against Armenians, Assyrians, and Pontic and Anatolian Greeks."

The IAGS called "upon the government of Turkey to acknowledge the genocides against these populations, to issue a formal apology, and to take prompt and meaningful steps toward restitution."
It is also noteworthy that on May 13 2009, Mr Berzan Boti, a Kurdish intellectual, acknowledged the fact that his forefathers had misappropriated Christian property belonging to Assyrians during the genocide. In an act of public restitution, he legally returned the misappropriated land back to its rightful owners, the Assyrian people.
I am pleased to inform Your Excellency that on March 11 2010, the Parliament of Sweden officially recognized the Assyrian Genocide alongside that of the Armenians, becoming the first nation to formally recognise the Assyrian genocide. It is the hope of Seyfo Center and Assyrians globally that this historic recognition by Sweden will be followed by moves to recognise the Assyrian Genocide on the part of other nations around the world. It is saddening however, that while more and more countries move to recognise the genocide, the Republic of Turkey still has not come to terms with its past.

Despite the fact that historical and scholarly evidence of the genocide's reality is overwhelming, the official policy of the Republic of Turkey remains one of utter denial and evasion.
Until this very day in fact Turkey continues to intimidate what remains of the ethnic Christian minorities in Turkey. In the case of the Assyrian people, this is through 'land grab' policies. The case of the St. Gabriel Monastery in Midyat, which was established in the 4th century, is a typical example of current Turkish policies of intimidation. The Turkish government threatens and puts on trial those who dare to voice an opinion which does not follow the state's view of history or offends what it considers to be 'Turkish national pride'. Despite all of this, our communities hold no ill-feelings towards the Republic of Turkey. We only hope that as Turkey modernizes and strives to enter the European Union, its past policies regarding the Christian population of the former Ottoman Empire are not forgotten or denied. We expect Turkey to do what numerous other governments around the world have already done which is to recognise the genocide committed against the Armenian, Assyrian and Greek peoples.

The Armenian nation knows well the reality of suffering and the pain of continual Turkish denial. By denying the reality of the genocide committed against the three mentioned groups,
Turkey in effect commits a second genocide. Therefore Mr. President, the Assyrian people stand steadfast in solidarity with the Armenian people in their demand that the Republic of Turkey must be held accountable for the horrific crimes against humanity committed by its predecessor the Ottoman Empire. At this point in time however Turkey shows few signs of revaluating its denial policies and moving towards legitimate dialogue and reconciliation.

This letter is also signed by a number of scholars, organizations and notable individuals who share the sentiments expressed herein. 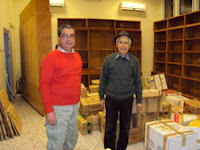